Thanks to a comment from Anonymous, the rules at Skatteverket have changed. You can get an ID if you allow Skatteverket to match your features and data in the Migrationsverket system. Takes several weeks long this way than using a living Swede as reference however. See his comment below.

I have been lazy. I should have applied for my Swedish ID card several months ago but I just wanted a break from all things bureaucratic in Sweden.

Getting a Swedish identity card is anything but simple if you’re not: 1. Swedish; 2. European.

Obviously I’m not Swedish otherwise I wouldn’t need to have this discussion. For Europeans, it’s easy as pie to get an ID card if you have biometrics passport issued after September 1st, 2006. Otherwise, you’re in the same boat as me.

For all of us other aliens? We need an attester. Basically in order to get your Swedish ID card you need a Swede to prove who you are.   A passport is not good enough for Skatteverket.   Because I guess there are thousands of immigrants running around with fake US passports and residency stamps begging for id cards! Yes, I know some immigrants come from lawless countries, but if the Swedish government is dumb enough to give them a visa, then I think them obtaining and ID card with stricter guidelines is moot. 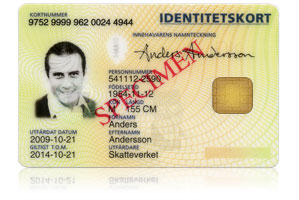 Back to the attester. You cannot just bring anyone in to vouch for you. Your attester has to fulfull the following requirements:
An approved attestor must:

Your attester can be:

Regarding your spouse or register partner: For you and your attestor to be considered as cohabitants, all of the following conditions must be satisfied:

Finally, any of the following persons may act as an attestor if he or she can present a decision or certificate showing the relationship you have with each other:

Before you show yourself up to the Skatteverket office waiving around your passport and your buddy, you need to pay them first. An id cards costs 400sek and has to be bank wired to Skatteverket. You should keep a copy of the wire transfer and take that with you as proof of payment. Here are bank account numbers to pay: Bankgiro 389-0100 or Plusgiro 50 40 62-1.

When you get to Skatteverket with your passport, buddy, and payment printout, you have to fill out a silly (so does the attester) and get a photo taken and your height measured. You get to sign some documents too.

After two weeks, you will get a notice to get a lovely, homegrown identity card made in Sweden.

There are a couple Handelsbanken in Sweden that process id cards for foreigners. I applied for mine at the Stureplan office. One, it is one the largest banks and two, it is well know to service foreign employees (all my ex-coworkers also got their id cards from that branch office). Of course depending on the mood of the bank teller, they may tell you otherwise. If you are persistent and nice, you can get lucky and get the card there.

If you do get an id card from Handelsbanken, you need: 1. attester; 2. 500sek; 3. a photo. You fill out a receipt and four weeks later, an id card arrives at the bank.

Now that I have my ID card, I can be like “bitch, I know you hate American passports so here’s my Swedish ID so you know my age!”

Either way, get that attester, your passport isn’t good enough to identify yourself.